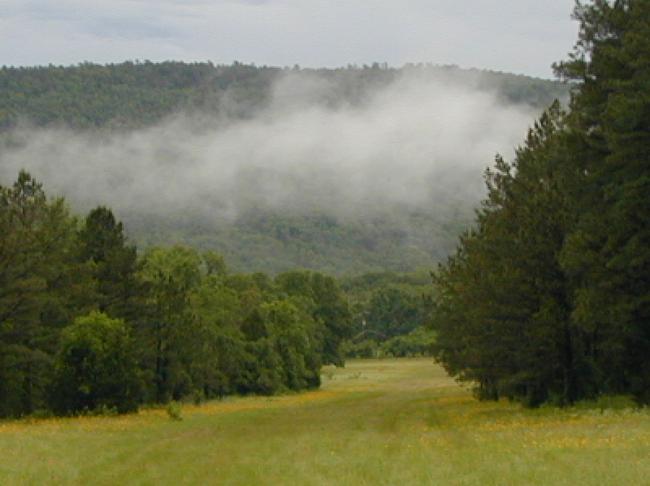 Our ranch has been in the family since the year of 1942.  It began as a 160 acre parcel bought by my father from the state of Oklahoma for back taxes.  It is nestled in a remote little valley in southeastern Oklahoma about 15 miles (as the crow flies, 35 miles if you drive) southeast of McAlester.  Over the years we have added to it , divided it, cleared it, cleaned it, abandoned it, leased it, rented it, and now returned to it.   The total acres owned by the family was just over 700.  Our part, the Jack Fork Valley Ranch is 360 acres, which includes 80 acres of the original 160.

We (my immediate family) had been living in Arizona for several years.  My wife, Pat, and I had always planned on early retirement here in the valley so we could really go to work!!  Our plans became a reality in June of 2004.  We made the move and decided that since we had been gone for so long and the ranch had grown up considerably with underbrush, weeds, briar vines etc. that goats would be the perfect livestock

For four or five years prior to the move back to Oklahoma we had been doing research on various breeds of goats and after visiting several operations and talking with several goat meat producers we settled on the Kiko breed.  We joined a new organization, The International Kiko Goat Association, stands to reason; we were starting on a new venture, as were they.  In approximately two years the IKGA had become the most innovative and progressive meat goat organization in existence, hopefully we could follow suit in our venture.

We attended the KikoFest in Tennessee in September of 2004 and bought the beginning of our New Zealand Fullblood heard.  We were there again in 2005, this time to sell a few goats.  We made several road trips across the southwest and have been adding to our heard since that first purchase at KikoFest.  We also bought some American Premier Purebreds and purchased some half-breed Kikos from a breeder here in the valley to use in the breed up program in the IKGA.  At this point our heard was not so large and most were young but we had the acreage and goats grow fast!!

Updating this summary, as of 2013 we have advanced to strictly a 100% New Zealand heard  It is much easier for us to manage as we do not have to keep track of percentages etc.  Now EVERYTHING is 100% New Zealand Kiko.  We breed approximately 50 does each year,  usually split between two to three bucks.  We normally have about a 50/50 split on doelings and bucklings, and a variety of colors.

With the goats came the definite need of Livestock Guard Dogs as we have a ever present predator problem, coyotes, bobcats, an occasional bear, etc.  Again, with much research on the subject we decided on the Anatolian Shepherd breed of dogs.  Our dogs are all working dogs and have been exposed to goats at an early age.  Parents of all dogs that are for sale are onsite and working.  All of our dogs are here to perform a job, if they do not do their job they become someone else's pet.  We have also ventured into raising registered Border Collie dogs.  They are a pleasure to work with and a huge asset in handling goats, cattle, (our grandchildren!!).  They try to heard anything that moves.  We are not into it big but on occasion have pups and started dogs.

If you are in our neck of the woods, you have an open invitation to drop in and visit us.  If you come to see an expensive home, fancy barns, impressive lots and costly fencing, you will only visit us one time.  If you come to see a beautiful, remote country and a working goat ranch with some really good 100% New Zealand Kiko goats you will be a return visitor.